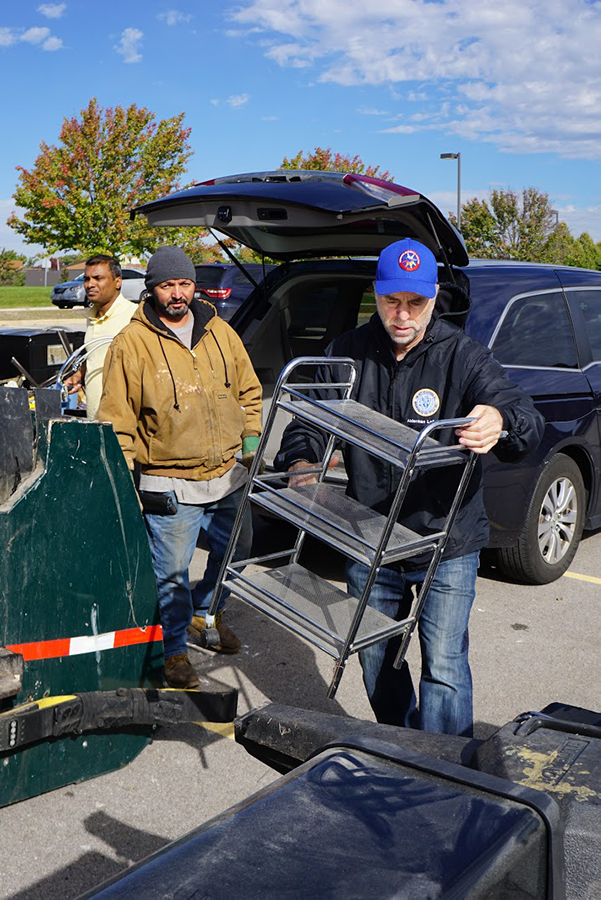 In 1992, I founded StreetWise, a newspaper for the homeless people, because I knew how hard it was for these individuals to get work. The organization has helped over 12,500 homeless individuals get instant jobs. I am currently an emeritus board member. In 2013, I represented a student from Congo who was attending Mooseheart and was being discriminated against. I successfully sued the Illinois High School Association. With my law, business, and real estate background I ran for Aurora alderman for Ward 10 because I felt that I could make a difference, and was elected to a four-year term.

I am a past president of the Aurora Rotary Club and am currently a member of the Aurora Sunrise Rotary Club. I have served on many other non-profit boards including the Kennedy Institute in Washington, D.C., the Aurora Regional Chamber of Commerce, Aurora Downtown, and RITA’s Ministry to help transition prison inmates into society.

I have received numerous awards for my volunteer work including the Lerner Newspaper Citizen of the Year Award and Citizen of the Month, the Martin Luther King Keeper of the Dream Award, and the Compassion Foundation Community Service Award.

I earned a Bachelor of Arts in economics from the University of Michigan. I then attended Pepperdine University School of Law, where I received a J.D. and studied abroad in London for one semester. I interned for a Wall Street law firm in Paris. I also received an advanced law degree, an LLM, from American University in Washington D.C. in international business.
As a self-employed lawyer, my law practice concentrates on real estate, estate planning, and business law. I am also a commercial real estate broker and developer focusing on land and shopping center development. I speak fluent French and conversational Spanish.

THE CITY IS FINANCIALLY IN BAD SHAPE!

On June 18, 2019, the Aurora CFO informed the City Council that the City is $1.11 BILLION in the red with debt, underfunded pensions, and bonds, among other items. The Irvin Administration then asked the alderman to spend $10 million to purchase nine old houses on Bilter Road by the Outlet Mall. Having already spent $9.5 million on the two hotels on Farnsworth and the corner lot on Bilter Road, I voted against this. Now the Irvin Administration is proposing we issue another $100 million in debt for various projects, including $50 million to move the Hollywood Casino to Bilter Road or build a convention center. This land is partially in my ward. The residents do not want either the casino or a convention center! We currently receive approximately $7 million per year from the Hollywood Casino, and it doesn’t cost the city a penny. And the Irvin administration has proposed another $9 million, on top of the $3 million already awarded, for the former Copley Hospital redevelopment and $23 million for a new warehouse for city cars and trucks.

PROPERTY TAXES ARE HIGH, BUT THEY CAN GO HIGHER!

The Copley Hospital redevelopment and the relocated casino or convention center will be in tax increment financing (TIF) districts, meaning they will generate little, if any, property taxes to cover the huge interest payments for the next 23 years. The new city building will also never generate any property taxes, as the city does not pay property taxes. This means that the Aurora taxpayers will foot the bill to pay for these wasteful big-ticket items. And with our skyrocketing pension costs, Aurora property taxes are sure to go up! We need to stop this runaway spending!

The newspapers have called out our current mayor for accepting large campaign donations after contributors have received favorable treatment from the mayor. I helped draft an ethics ordinance that was ultimately passed, but it has no caps on contributions as do other units of government. I proposed a $3,000 cap on contributions from any individual, business, or political action committee. The mayor has received from $11,000 to $25,000 from various individuals or businesses—This is absurd! Read more in the Beacon News article, “Donors that gave thousands to Aurora mayor get high-profile projects”

JUDD IS A COMPASSIONATE INDIVIDUAL, FATHER, BUSINESSMAN, AND ALDERMAN. HE ALWAYS STRIVES TO EMULATE THE ROTARY MOTTO, “SERVICE ABOVE SELF.”

STAY IN THE KNOW